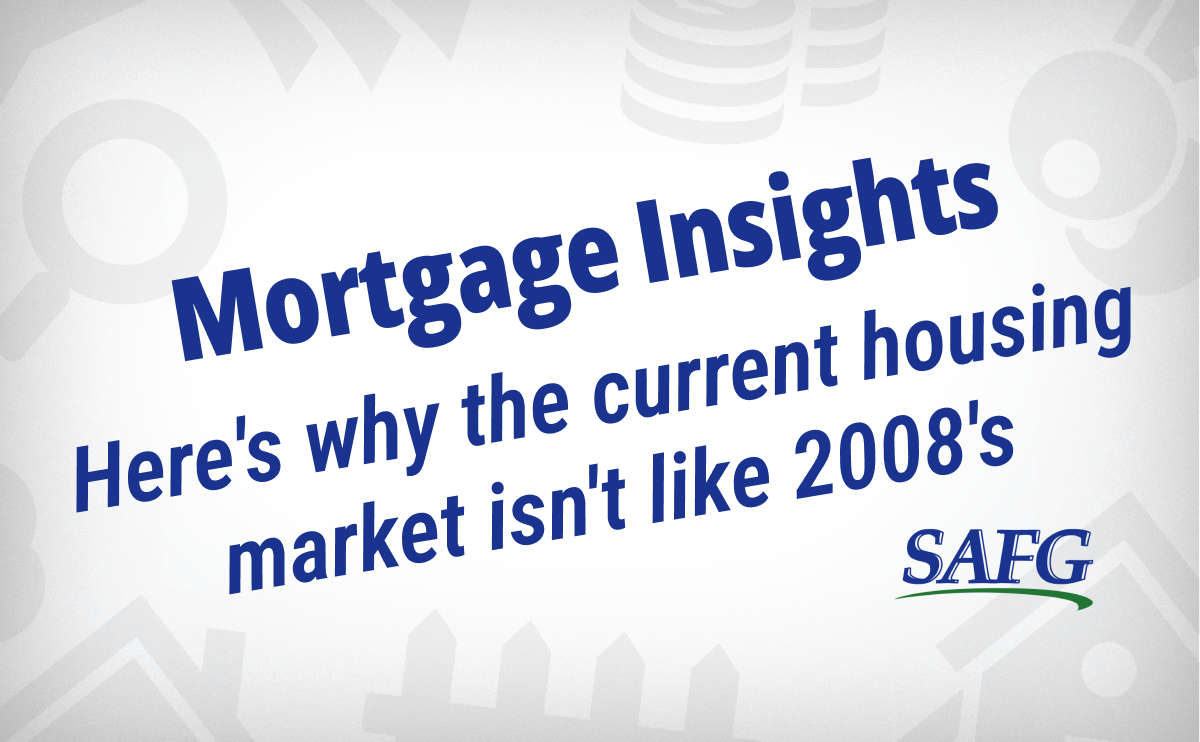 Many news headlines are comparing the current housing market to 2008 due to inflation and the recent housing boom. But don’t fret because many experts agree that the Great Recession is unlikely to be repeated in this current market.

One of the main reasons is that America’s housing market is in far better health now, thanks to the new lending regulations triggered by the Great Recession. Basically, the newly established rules put today’s borrowers on a more solid footing.

Let’s dig in a little deeper.

Currently, there are 2.5 million adjustable-rate mortgages, also known as ARMs, accounting for around 8% of all active mortgages. On record, this is the lowest volume. Right before the Great Recession happened, there were 13.1 million ARMs, representing 36% of all loans at that time. Because it represented such a significant amount of loans, any issues would cause widespread repercussions.

It’s important to note that, in the past, the underwriting on those types of mortgages wasn’t necessarily forthright, but new regulations after the Great Recession changed the rules.

Today, adjustable-rate mortgages are underwritten to their fully indexed interest, and above 80% of today’s ARM originations operate under a fixed rate for the first 7 to 10 years.

It’s also noteworthy that only about 1 million currently active ARM loans are set to reset. Whereas, in 2007, around ten million adjustable-rate mortgages were facing higher resets, significantly leading to the Great Recession.

There was also a housing bubble that contributed to the 2008 recession. A housing bubble, or real estate bubble, is a market condition in which housing prices rise beyond a reasonable price due to increased demand, emotional buying, and limited supply.

Unlike the previous housing boom, it can be said that the increase in housing prices since the start of the pandemic is justifiable. The U.S.A. demographics were already supporting the housing growth, and the desire to purchase a home grew bigger as people saved more and spent more time indoors. The lifestyle change caused by the pandemic caused many Americans to reevaluate their living arrangements.

One of the reasons why there is no bubble is because borrowers are less likely to be able to get a loan without a down payment, except for certain USDA & VA loans. Now, down payments can typically be covered by cash or other credits.

Third, even though house demand has wavered in the past few months, it has remained relatively stable.

The higher down payment amounts and higher credit score requirements will help ensure that another housing bubble won’t happen again.

Experts agree that the 2022 housing market is fundamentally different from the one in 2008. So if you’re worried about getting ARMs or improving your credit score, you can take it easy because the housing market won’t crash again.

The right tools to help you every step of the way

An easy way to know your next step

Learn about all the available loan programs

Learn what loan options are available

Break down the terms and acronyms that will be used

Learn about current topics and trends

Ask questions and learn more to get started

Southeast American Financial Group, Inc. strives to ensure that its services are accessible to people with disabilities. Southeast American Financial Group, Inc. has invested a significant amount of resources to help ensure that its website is made easier to use and more accessible for people with disabilities, with the strong belief that every person has the right to live with dignity, equality, comfort and independence.

Southeast American Financial Group, Inc. continues its efforts to constantly improve the accessibility of its site and services in the belief that it is our collective moral obligation to allow seamless, accessible and unhindered use also for those of us with disabilities.

Despite our efforts to make all pages and content on Southeast American Financial Group, Inc. website fully accessible, some content may not have yet been fully adapted to the strictest accessibility standards. This may be a result of not having found or identified the most appropriate technological solution.

If you are experiencing difficulty with any content on Southeast American Financial Group, Inc. website or require assistance with any part of our site, please contact us during normal business hours as detailed below and we will be happy to assist.

If you wish to report an accessibility issue, have any questions or need assistance, please contact us by sending an email to: jdavis@southeastamerican.com